With respect to Division of Stone Disease, we provide treatment for stones in the kidney, the ureter, urinary bladder and in the urethra.

The common symptoms of urinary stone formation are:

Initial treatment will focus upon the relief of pain. After this, the next step will be to facilitate the passage of the stone or the removal of the stone itself.

Stones larger than this will invariably need to be removed by one of the many methods available. If there is an anatomical abnormality, the priority will be to correct that abnormality while removing the stone.

1-2 cm solitary stones in the kidney is preferably treated by ESWL. This is a method by which the stone is powdered when pressure waves from a machine are focused on the stone. The stone fragments will then pass out in the urine stream over a period of 1 to 12 weeks.

Larger stones in the kidney are preferably removed by PCNL. In this method, the patient needs to be admitted to the hospital. A small puncture is made from the back directly into the kidney, the stone is identified, fragmented and completely removed.

Larger stones in the lower ureter or those stones which do not pass out despite waiting for 1 month, need to be removed by laser lithotripsy. In this, the stone is visualized and fragmented by passing a small endoscope into the urinary tract from the urine passage.

Open surgery for stones in the ureter is used only in complicated cases.

Uric acid stones, which are generally seen only on the ultrasound, and not on the x-rays, if less than 1 cm, can easily be dissolved by simple alkalinization of the urine.

Most patients with urinary stones need to make certain minimal changes in their diet that may help in the prevention of a recurrence. These include:

In our hospital we do Stone Pack (SP) tests - Briefly these include blood and urine tests which are directly linked to increased risk of stone formation, blood sugar, renal function and haematology.

Plain CT (Computed Tomography) scan of KUB to get more details of the stone. Note CT scan is most sensitive test to detect the presence of stone.

Additional functional tests like Intravenous Urography, or Contrast CT KUB or isotope renogram. Above tests are to be done or not would be decided by the urologists, based on various parameters.

Additional functional tests like Intravenous Urography, or Contrast CT KUB or isotope renogram. Above tests are to be done. or not would be decided by the urologists, based on various parameters.

Specialized tests to detect cause of stone formation: Those who had recurrent stones, family history of stone disease, stones in childhood, bilateral stones, solitary kidney, more testing is required. In our hospital we have customized blood tests called SP3 which include fasting and random blood tests. 24 hour urine tests called SP4 which are done on 3 consecutive days. This is in addition to sending stone for analysis (either spontaneously passed out or that is retrieved during surgery). In our hospital we get stone analyzed by FTIR (Fourier-transform infrared spectroscopy) method which is one of the most accurate methods. With all these reports, your doctor will suggest appropriate dietary modifications and medications, if required.

PCNL is a procedure for removing stones in the kidney or the upper ureter.

Illustration Showing How PCNL is Performed 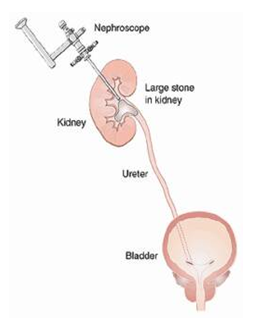 PCNL is a well-established procedure by which stones in the kidney or the upper ureter are removed by making a small incision in the flank. Generally, an incision, that is 1 cm or less than 1 cm, is made in the flank. A guide wire is passed through this incision into the kidney. This is performed under fluoroscopy or x-ray control.

A passage is then created around this guide wire by dilatation. Through this passage, a nephroscope is passed into the kidney to visualize the stone and remove it. Larger stones can be fragmented by different methods and removed. Stones are therefore cleared easily. Once the procedure is complete, a tube is left through this track as drainage for one or two days.

The main advantage of this approach is that, unlike traditional open surgery, only a 1 cm incision is made in the flank. The stones can be visualized directly and removed. Unlike ESWL or ureteroscopy, the stones are removed in the same sitting and the kidney is cleared of calculi. The stay in the hospital is only for 3-4 days.

This surgery would be recommended as a treatment of choice if the patient has kidney stones larger than 2 cm, upper ureteric stones bigger than 1 cm or at times for stones found in the lower pole of the kidney that cannot be effectively treated with either ureteroscopy or ESWL. This procedure is also performed following the failure of other modalities of treatment such as medical therapy, ESWL, etc., for renal and upper ureteric stones.

The success rate of clearance of stones with this procedure ranges between 90 to 95%. This actually depends upon the size, number and location of these stones. Sometimes, complete clearance may require a second procedure after a few days.

For the post-operative course, the patient will generally need to stay in the hospital for 2 to 3 days after the procedure. He or she will also undergo additional x-rays or ultrasound studies, to determine if there are any residual stone fragments present. A large amount of residue will require the urologist to look again with a nephroscope to remove it. The other alternative is to treat the remaining fragments with ESWL.

From the site of the puncture, the patient will have a drainage tube and a urethral catheter, for a day or two. Following the removal of the flank drainage tube, urine may leak for a day. Post-operatively, the urologist will also encourage a high fluid intake to keep the daily volume of urine produced to more than 2 liters a day. By and large, this procedure is safe. Some risks that can be associated with all surgical procedures are the possibilities of bleeding (1%) and infection, sometimes requiring a blood transfusion.

Some patients have prolonged leakage of urine from the flank site, requiring ureteric stenting. Fever, if present, will require a change in antibiotic.

Rare complications include persistent uncontrolled bleeding due to arteriovenous malformations or pseudo-aneurysms (0.4%), which would need secondary procedures or even a nephrectomy to control the same. When a supracostal puncture (above the 12th rib) is made, complications would then include pneumothorax (commonly called collapsed lung caused due to the accumulation of air or gas in the space surrounding the lungs) or fluid accumulation in the thorax. Again, the incidence of these is only 0-4%.

The time by which a patient can get back to work would depend upon the magnitude of the stone burden and the number of tracts made. Most patients return to average activity levels within a week or so. A return to vigorous activity should probably take place after two weeks.

The contraindications to this procedure are bleeding disorders and pregnancy (due to the risk of radiation). The others are medical problems making the patient unsuitable for anaesthesia. It is advisable to maintain a urine output of 2 to 2.5 liters per day. Your doctor may also advise dietary changes and medications, which will be individualized. Generally, a high-fiber diet, with avoidance of high-calorie foods, is recommended.

Separate and specific changes in the diet may be suggested in case of other conditions associated with urinary stones.

Public Notice: NU Hospitals would like to inform the general public that NU Hospitals practices all organ transplants in accordance with The Transplantation of Human Organs Act 1994. NU Hospitals do not buy or sell any organ and seriously condemn the act. NU Hospitals do not by any nature seek your personal information such as name, telephone, address or banking details for any purpose.